In DC 37’s triennial Council leadership elections ending on January 25, Local 768 President Carmen De León won a seat as Vice-President on the Executive Board of DC 37. Except for when the Delegate body is in session, DC 37’s Executive Board is the highest governing body of the union. As a candidate on the Members-First slate, President De León ran with twenty-eight others to serve the 2022-2024 term, all of whom won their seats.

Nearly all twenty-nine leadership seats were uncontested and therefore these candidates won “by acclamation.” Three seats were contested as a result of previous officeholders retiring. To inform members of how this particular body functions, its purpose, and how its members are chosen, here is a brief explanation of the Executive Board of DC 37 as laid out in our DC 37 constitution.

Firstly, this is a ‘delegated election’, which means that rank and file members are not the ones voting for these officers but delegates that have been elected within their own Local union are (i.e. the eight Local 768 delegates to DC 37 voted in this election, alongside the 200+ other eligible delegates that make up the delegates assembly.) Furthermore, the voting strength of each delegates is weighted according to the size of the Local to which they belong.

Secondly, there are two types of VP’s, each elected in a distinct manner. The Locals that represent at least 5% of the entire Council membership are constitutionally granted a VP seat. The VP for this “5% local” then is elected solely by the delegates from that particular Local. Currently, there are six such VP seats allotted to these Locals.

The vast majority of the remaining Locals in the council jointly vote for the rest of the VP seats on the board. The delegates of these “non-5% locals” therefore are the ones who elect the remaining nineteen “at-large” VP seats.

Finally, the President of the DC 37 Retiree’s Association is automatically granted a voice on the board, but does not have the right to vote on matters that come before it. 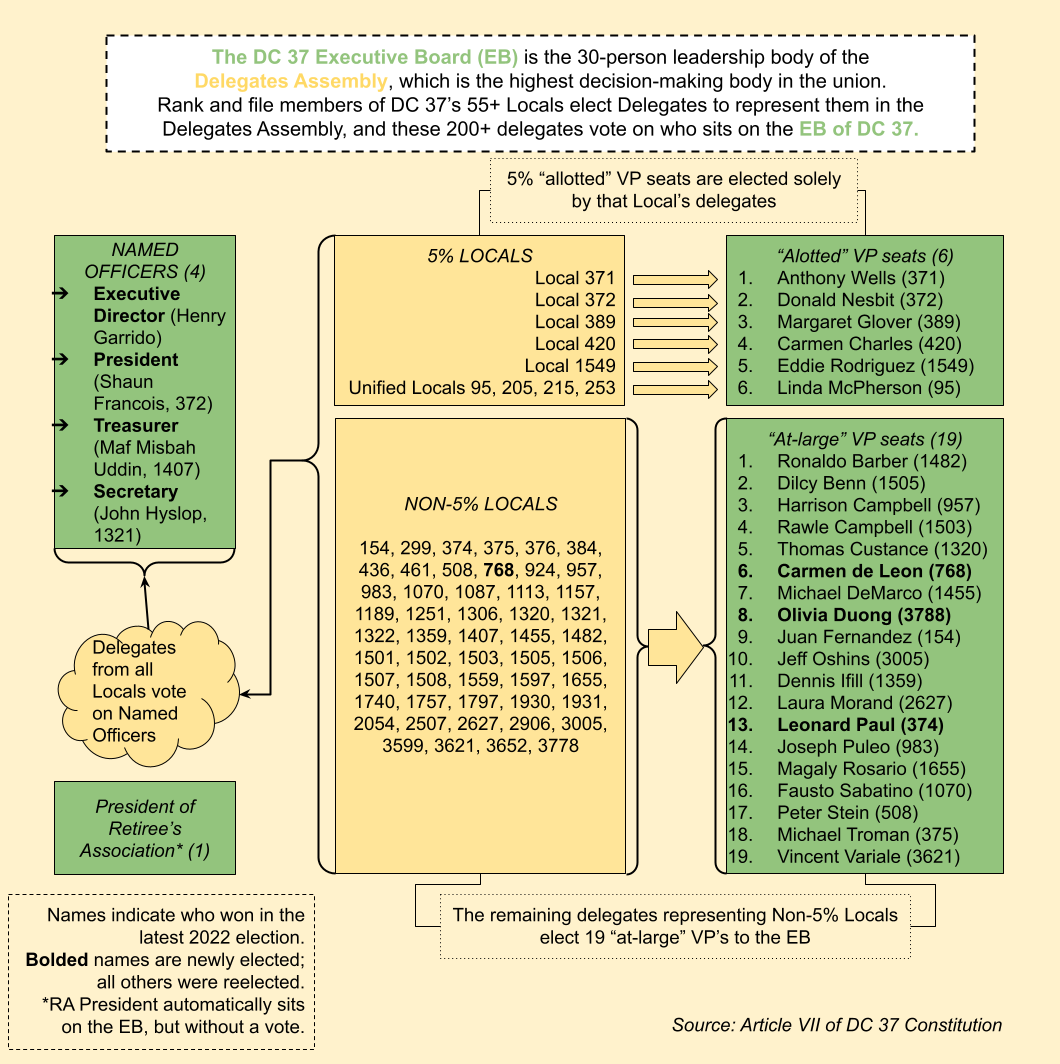 Ryan McGuire is a Labor standards investigator and shop steward at DCWP and the secretary of Local 768.