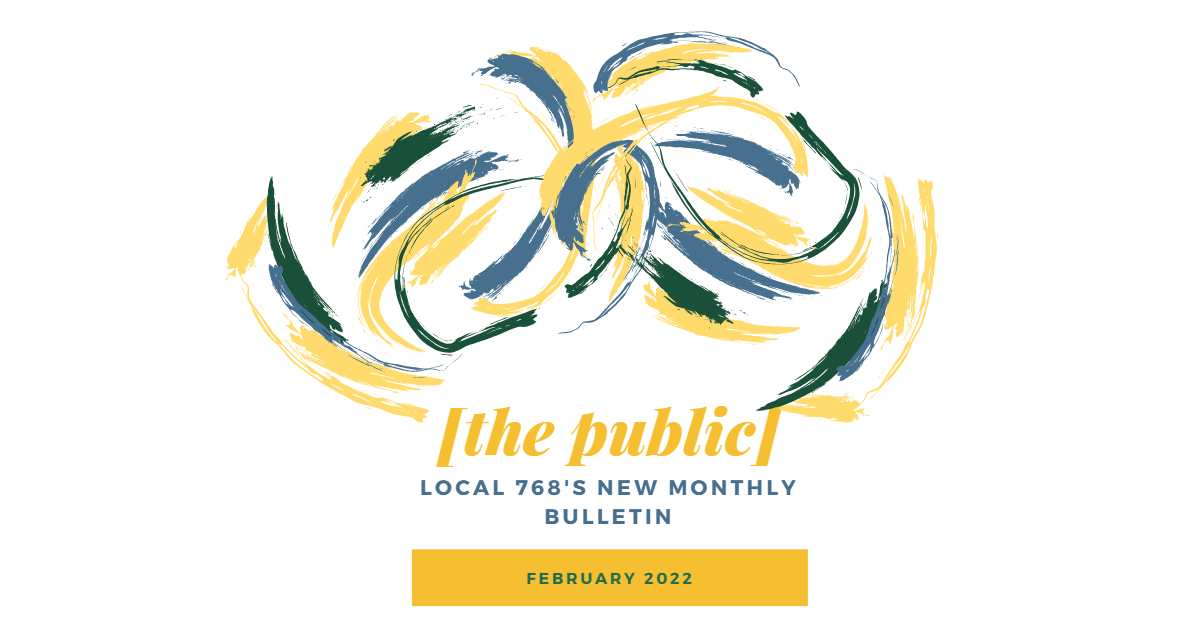 [The Public] is Local 768’s new monthly bulletin compiled by members of Local 768. By giving updates on union developments and events between membership meetings, we hope to help inform members and encourage involvement in our union’s democracy.

In DC 37’s triennial Council leadership elections ending on January 25, Local 768 President Carmen de Leon won a seat as Vice-President on the Executive Board of DC 37. Except for when the Delegate body is in session, DC 37’s Executive Board is the highest governing body of the union. As a candidate on the Members-First slate, President de Leon ran with twenty-eight others to serve the 2022-2024 term, all of whom won their seats.

Nearly all twenty-nine leadership seats were uncontested and therefore these candidates won “by acclamation.” Three seats were contested as a result of the retirements of previous officeholders. To inform members of how this particular body functions, its purpose, and how its members are chosen, here is a brief explanation of the Executive Board of DC 37 as laid out in our DC 37 constitution. 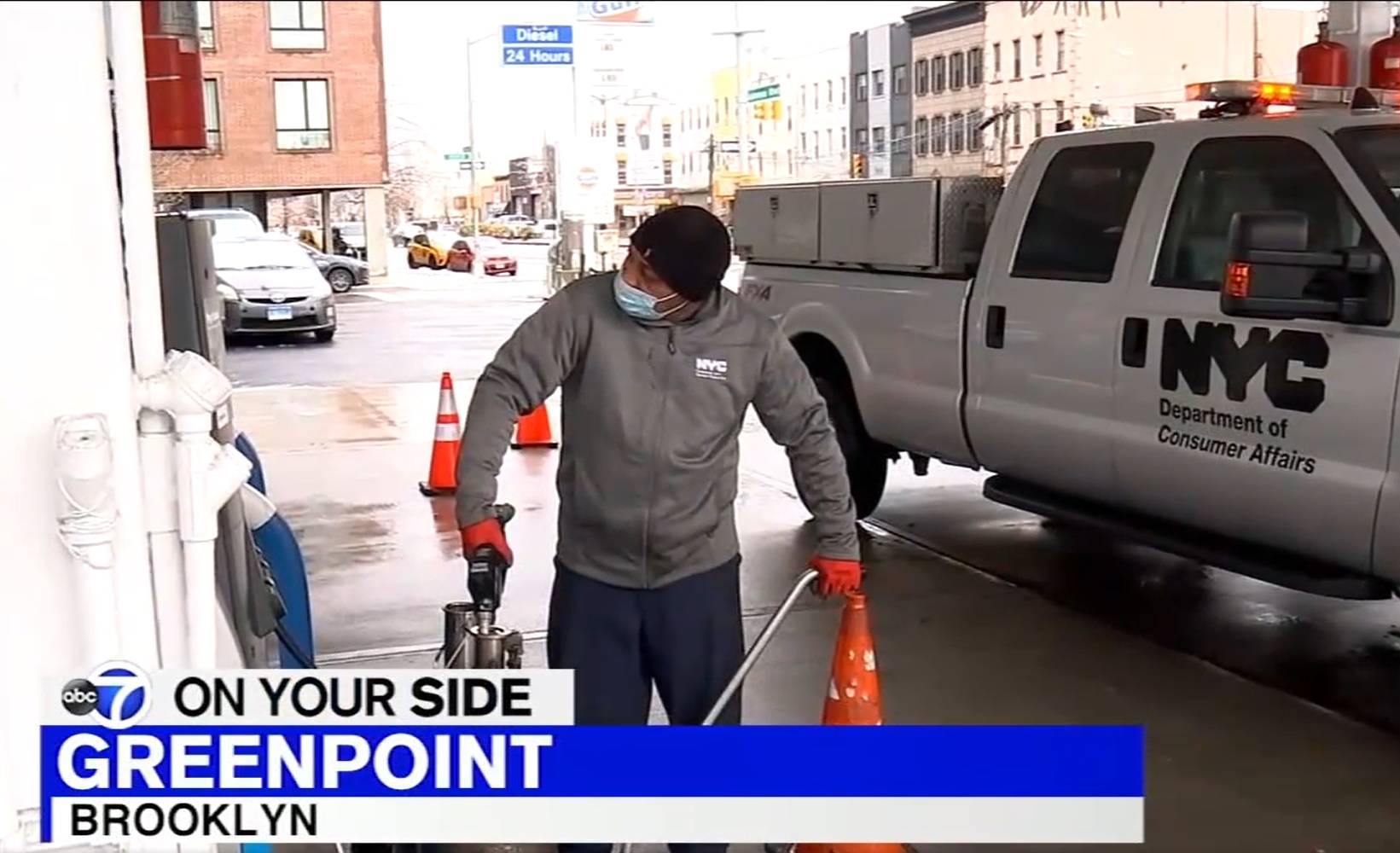 NYC’s ‘Gas Police’ ensure consumers are getting what they paid for at the pump.

The NYC department of Consumer and Worker Protection randomly checks all 6,303 pumps at roughly 700 gas vendors each year.

"The meter of the pumps can be off, and we check for the accuracy of that, and if it is found out of tolerance, we have it condemned," said Armando Sosa with the NYC Department of Consumer and Worker Protection.

Run to represent your local Community Board!

Are you a union member, residing in NYC, looking to get more involved in your community? Applications are open through March 4 for NYC Community Boards, the most grassroots level of city government. 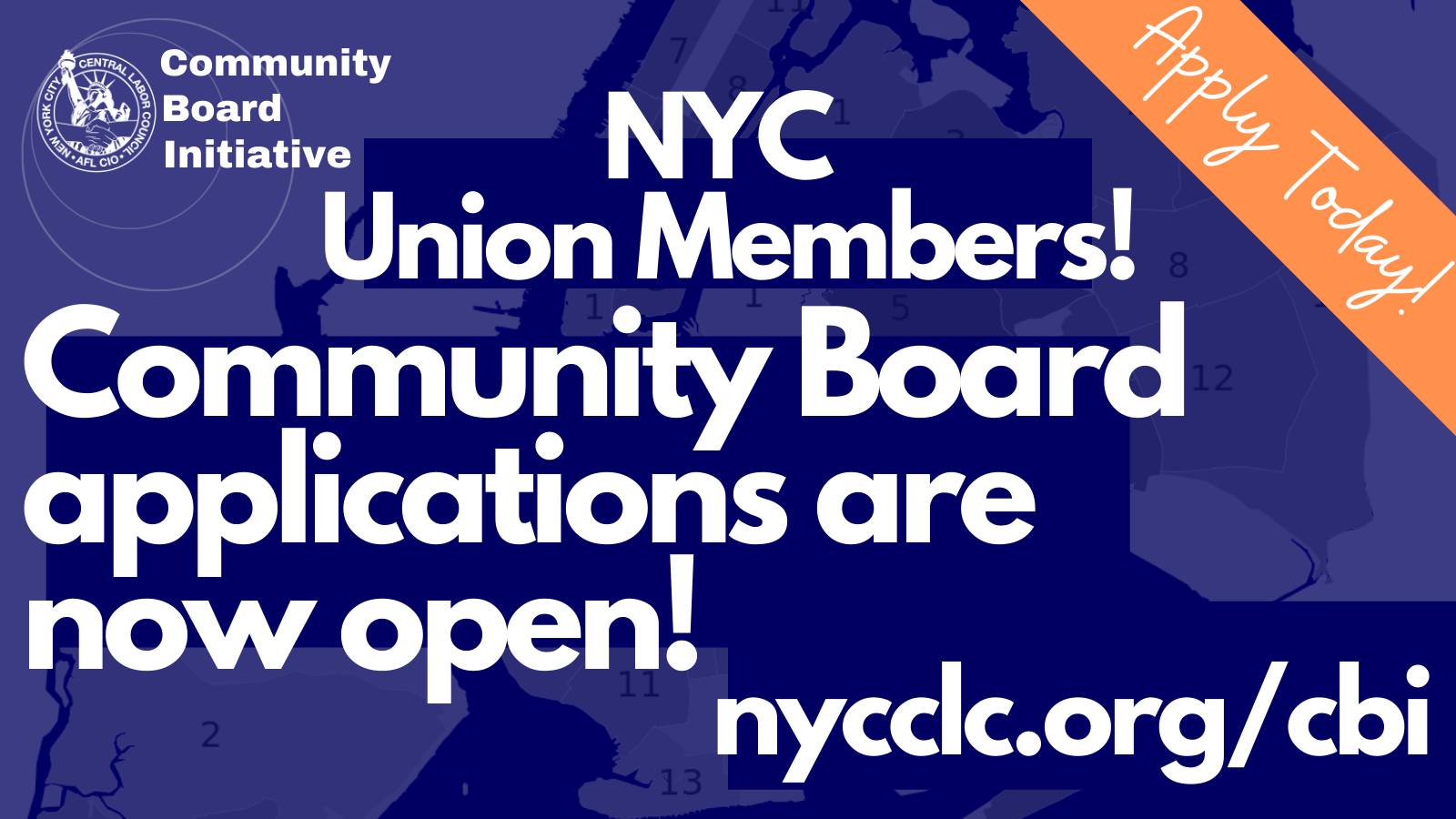 Manhattan REI workers win their fight to unionize with 86% yes

Congratulations to the staff at REI outdoor sports in Manhattan who've overwhelmingly voted to unionize with the Retail, Wholesale and Department Store Union (RWDSU), making them the first unionized REI in the nation! The RWDSU is the same union organizing Amazon workers at a pivotal warehouse in Bessemer, Alabama, where later this month they will conclude voting.

These workers will join another cohort of first-in-nation union organizing happening at Starbucks coffee currently, where at time of print over 2,000 workers across 73 stores have filed for an NLRB-supervised election, including at least 3 stores in NYC. 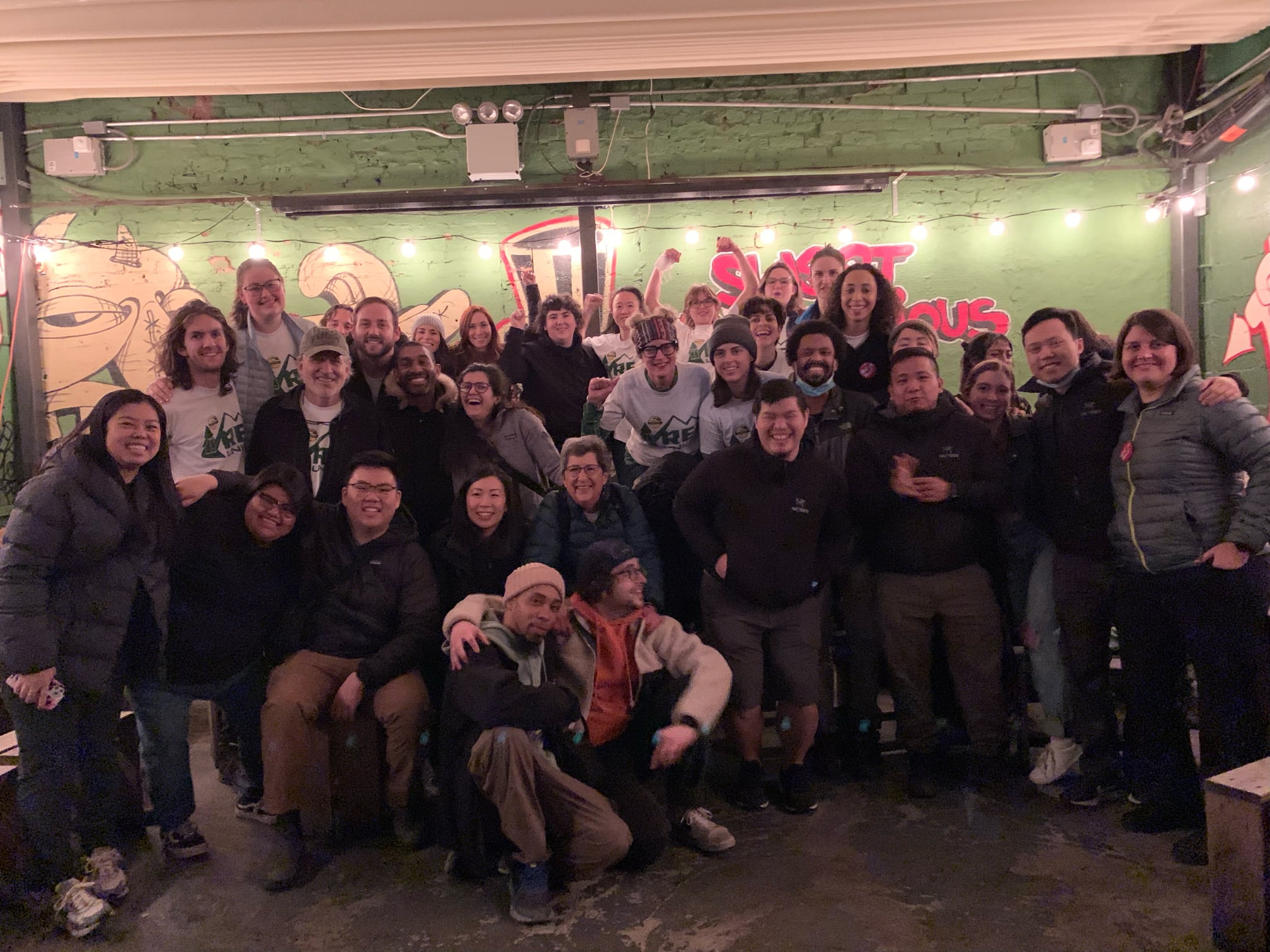 🗳 Elections for Social Work Chapter leadership will be held online and via mail March 3-31, and results will be announced April 1.

This meeting will be to answer any questions and clarify information on the end of the T2 program.

The NYC Teleworking Expansion Act is slated to be voted on this legislative session - and getting your elected state legislators to support it is paramount!

Our friends at Civil Service Bar Association (CSBA/Teamsters), the union for agency attorneys, has setup this email form you can use to easily contact your state representatives. Before sending, just edit your union to be ‘Local 768’ and add in your personal reason for supporting the bill

This month in Labor History 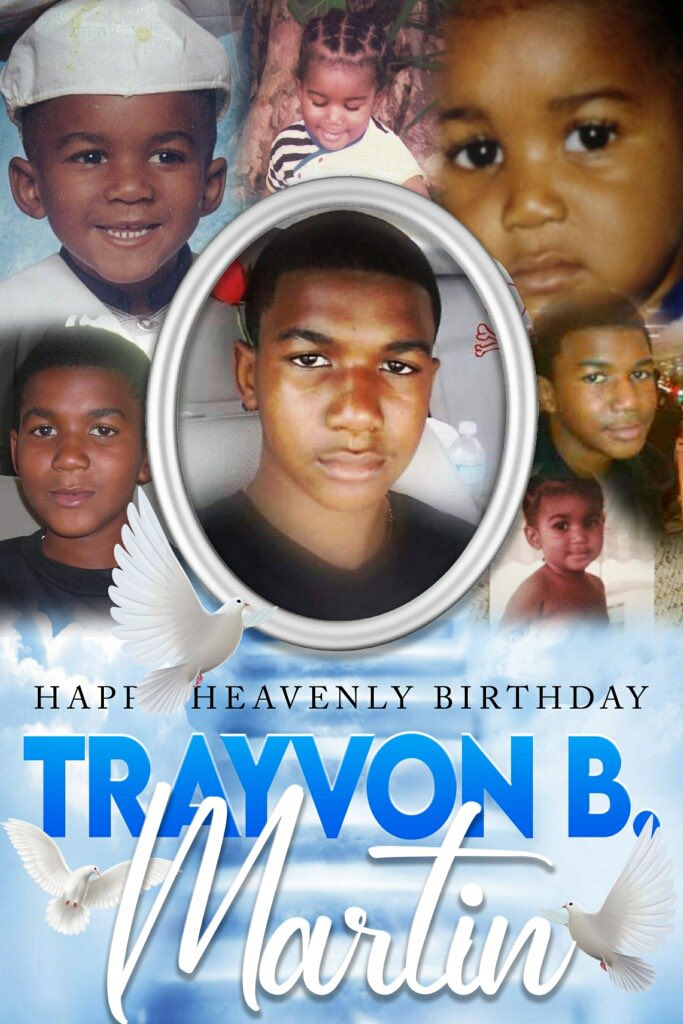 Trayvon Benjamin Martin was born, and would have been 27 this year. On Feb 26, 2012, Trayvon Martin, a Black teenager, was murdered. The death of Martin and the acquittal of George Zimmerman sparked the national and global Movement for Black Lives.

Wisconsin Gov. Scott Walker announces he will call out the National Guard, if necessary, to deal with any "unrest" among state employees in the wake of his decision to unilaterally end nearly all collective bargaining rights for the workers with Act 10 - 2011 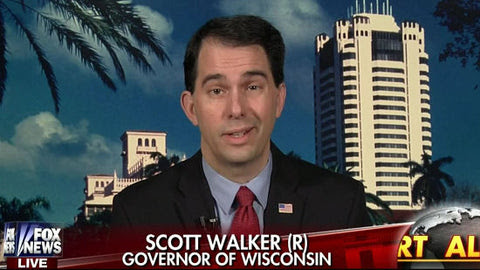 Sanitation Workers Strike in Memphis. African American sanitation workers Echol Cole and Robert Walker were crushed to death on Feb. 1, 1968 when the rain triggered the trash truck’s compactor in Memphis, Tennessee. Their deaths, along with the racist treatment of the sanitation workers, led more than 1,100 workers to strike for better wages, conditions, and safety on Feb. 12, 1968. (Teen vogue / Zinn Edu Proj.) 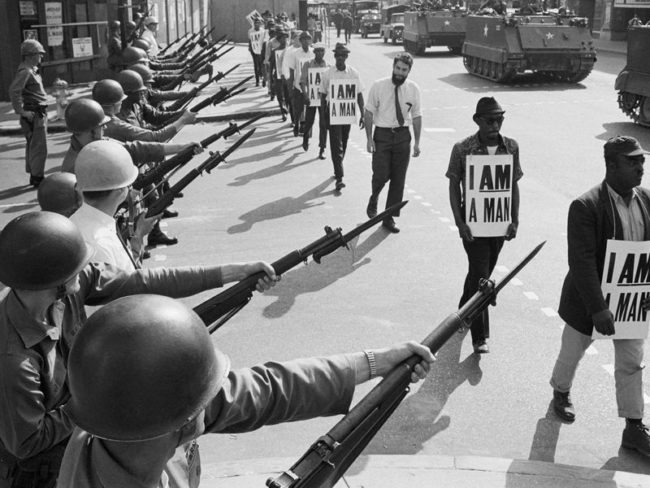 The DC 37 Education Fund is going to be offering a higher-level certification course to prepare for the CCS exam that will appeal to coders. The application is currently available at https://www.dc37.net/benefits/education/offerings/certified_medical_coding_examprep The Education fund still offers the preparation course for the CCA exam if members...