Since the beginning of this pandemic, Local 768/DC 37 members have continued to serve our fellow New Yorkers in a great time of need. Through all of this, many of us were unnecessarily exposed to the virus by not getting the PPE we needed and were met with unhelpful and contradictory guidance for keeping ourselves and our families safe. Meanwhile, municipal office workers adjusted to working from home for the first time out of the need to reduce the spread of COVID-19 citywide and keep those that needed to work in-person safer.

However, in September 2021, the City mandated a full return to the office while refusing to accommodate the flexibility workers need for childcare, vulnerable family members, and the enduring effects of the pandemic on our communities.

The City's attempt to return to a "normal" defined by full time in-person work seemed to be less about operational necessity than a drive for commercial profits at the expense of worker’s safety and well-being. And we will not be used as political pawns any longer. That is why Local 768 members have chosen to band together in the past several months to organize for safety, better working conditions, and more flexible work arrangements.

At the Department of Consumer & Worker Protection (DCWP), unionized staff in the Office of Labor Policy and Standards (OLPS) serve NYC workers by enforcing key municipal labor laws. Those include guarantees of paid sick leave for nearly all private -sector workers, fair scheduling laws for those who work in the retail or fast food sectors, and assistance for freelancers to ensure proper and timely payment for their work.

Like many other agencies, DCWP staff faced an influx of pandemic-related complaints that fell within its jurisdiction. Intake staff helped guide workers who came to the agency with health and safety concerns at their worksites, investigators confronted employers that tried to lash out at those who spoke up, and attorneys provided up-to-date legal guidance for addressing coronavirus hazards at work.

All of this was done remotely as a result of the unprecedented workplace hazard known as COVID-19.

So when Mayor de Blasio announced—with only two weeks notice—that we would be required to return to the office full time with very few assurances that our worksites were safe to return to, staff were instantly reminded of the unscrupulous employers who had been the subject of countless calls to the agency for nearly two years.

Under the name of OLPS Labor Committee, nearly all unionized staff in the division quickly drafted and signed a letter to the Mayor and the DCWP Commissioner - cc’ing other relevant elected officials, including city, state, and union representatives - expressing our concerns and asking for a policy that will accommodate them. With six different unions representing us, it was also incumbent upon us to organize ourselves to bridge divides that might impede on working together to stand up for what we believed was an ill-conceived policy that impacted us all.

DOHMH letter to the Health Commissioner

Similarly, at the Department of Health and Mental Hygiene (DOHMH) a group of staff was deeply alarmed about the roll-out of the return to office mandate. Staff were concerned about the lack of a scientific basis for a safe return and the disproportionate impact on workers’ mental and physical health, particularly for caregivers and people of color. After the Mayor demanded that Agency operations be performed solely within the confines of City office buildings, DOHMH workers were feeling devalued, diminished, and in need of real answers for their valid concerns.

In an October 1 letter penned to Health Commissioner Chokshi, over 1,000 DOHMH staff expressed how the full return to office policy did not align with the Agency's core values of science, equity, and compassion, with a priority of equity, which was established to guide the DOHMH’s work across NYC. Recommendations included advocating for and implementing a permanent telework hybrid model, increased access to PCR testing, and the use of relevant and science-based data to inform office policies that prioritize staff and community safety. 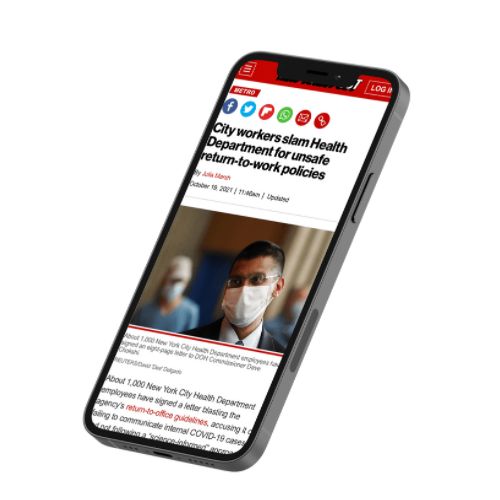 Whereas DCWP & DOHMH union members opposed the outright prohibition on working from home, Local 768 medical records specialists face an inconsistent patchwork of telework policies that are different for each H+H hospital. Whether you can work from home or not depends simply on which of the eleven public hospitals employs you.

After bringing these issues to management on a case by case basis for some time, coders decided a collective response was needed. Meeting at the newly established Coders Chapter, members in the title decided to write up a petition outlining their basic demands for dignity and respect across the hospital system. In addition to the right to work from home permanently, coders are also calling for a voice in H&H policy, an end to improper quotas, and the streamlined use of outside vendors.

Despite the letters sent, there's still more to do. Out of a desire to secure a fair and reliable telework policy going forward for its members, Local 768 chose to co-host a phonebank alongside the grassroots social justice group City Workers for Justice to push for passage of the “NYC Telework Expansion Act”. This NYS bill requires city agencies to establish permanent telework policies for their staff.

The phonebank attracted over thirty attendees, half of them Local 768 members. City workers were given a list of State Assemblymembers and Senators to call and share their concerns and desire for a permanent option to telework.

As a result of the 500-plus calls that were placed to representatives, several new co-sponsors signed the bill, and even more have come out to support since then.

Where is the bill now?

The bill faces opposition from large commercial landlords, Mayor Eric Adams, and Governor Kathy Hochul out of fear that office workers are needed in the downtown business districts to stimulate the economy and buttress tax revenues. The previous Mayor also claimed, without ever providing evidence, that civil servants performed poorly while working from home. What opponents are afraid to acknowledge, though, is that money is still being spent—but now, it's being spent in the neighborhoods where city workers (most of whom are outer borough dwellers) actually live, which strengthens local economies. Absenteeism was down and productivity was up during the period when civil servants worked from home, and the ability to attract and retain staff would be reduced amidst a private sector job market saturated with remote working opportunities. That is, if NYC government does not allow for greater workplace flexibility.

If NYC wants to stay a leader in progressive workplace policies, legislators must pass “NYC Teleworking Expansion Act” and join the 21 states that have already recognized telework as a critical tool for flexibility, accessibility, and equity for municipal workers.

Ryan McGuire is a Labor standards investigator and shop steward at DCWP and the secretary of Local 768.